Only a few days until Halloween, how exciting it is! When most people think of this celebration, they think of trick-or-treating, jack-o-lanterns carving, parades, bobbing for apples, and other family-friendly activities. Straddling the lines between fall and winter, life and death, Halloween is a time of superstition and gatherings. This article is about spooky Halloween packaging designs throughout the latest years, let’s check them out!

Found that Halloween is an increasingly shopping potential occasion, brands and big companies have decided to create new looks for numerous product lines just for Halloween. Below are the spookiest packaging designs that turn not-so-spooky products into creations that are worth sending you goosebumps.

In 2020, Burger King ran a campaign called Burger King’s Ghost Whopper for Halloween to tap into people’s fascination with horror and the fun they get from being scared. Inspired by Eastern European horror film posters, they designed packaging with a dark folk-tale meets being-stalked-by-a-murderous- ghoul vibe. The pun #BKURSED which is the combination of BK (stands for Burger King) and the word “Cursed” is printed on paper packaging and paper cups putting a smile on people’s faces and also an interesting way to get customer’s attention on their campaign. 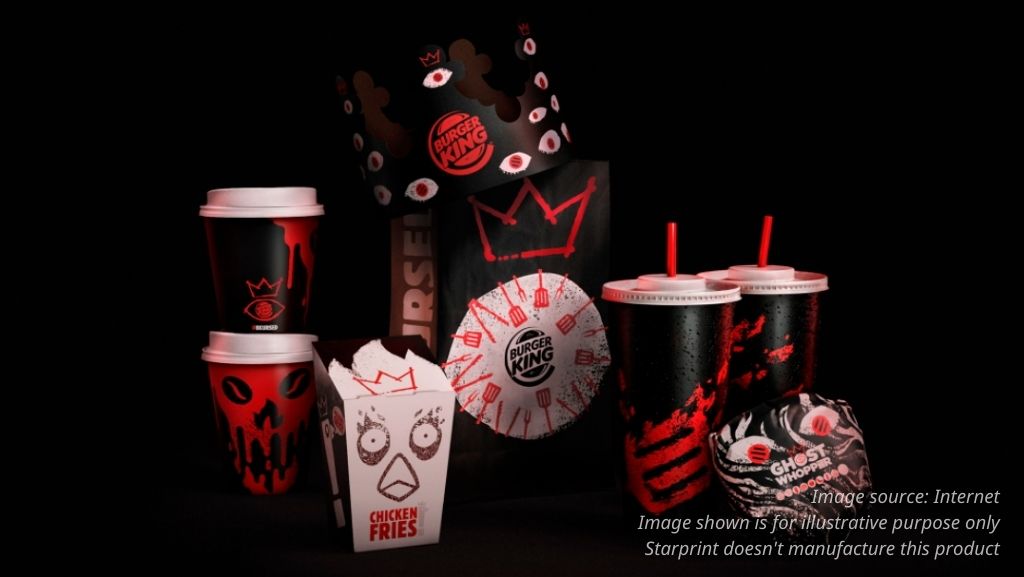 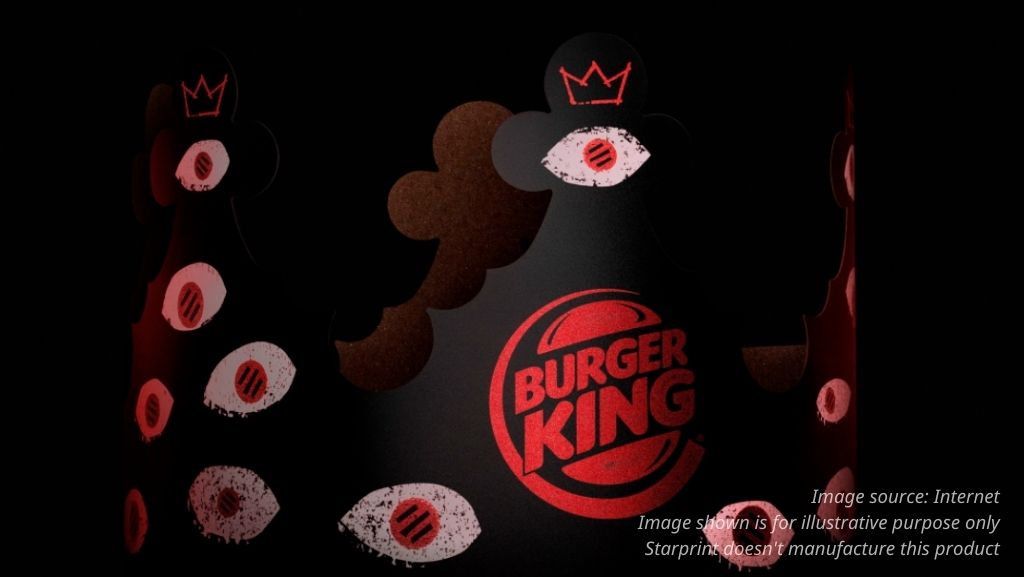 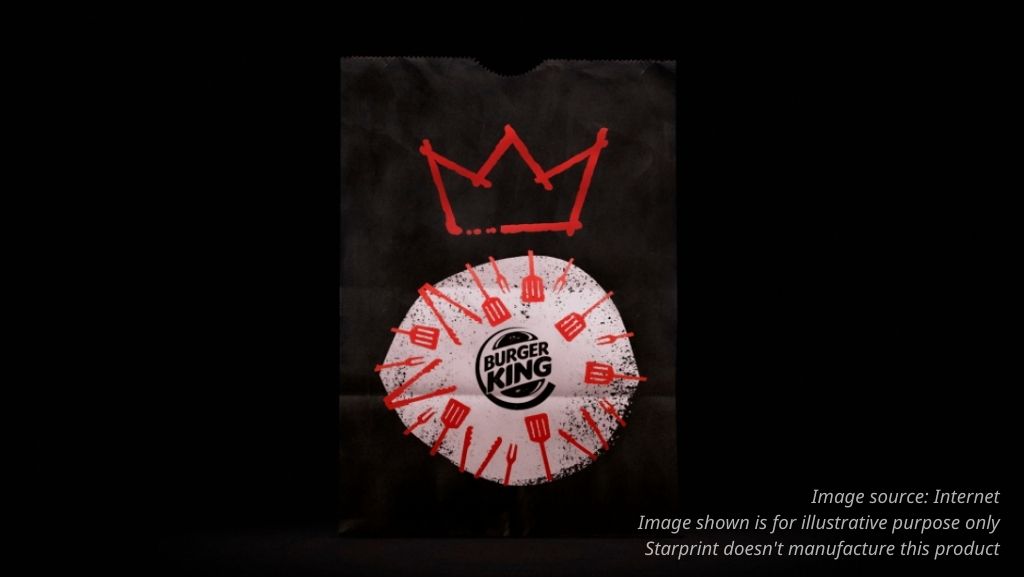 Just in time for Halloween of 2016, SkinnyPop company based in Texas, USA was targeting heat-loving consumers by creating this chip, so spicy it comes in a coffin-shaped packaging and only sells in a single chip. The package features a drawing of a white Grim Reaper on a red background, and across the top of the box, it reads, “Inside: One deadly chip”. Made from the hottest chilies in the world called Carolina Reaper pepper and the Ghost pepper (Bhut Jolokia), a trend to try this chip had become viral along with hashtag #Onechipchallenge and its packaging must have played an important role in arousing people’s curiosity. 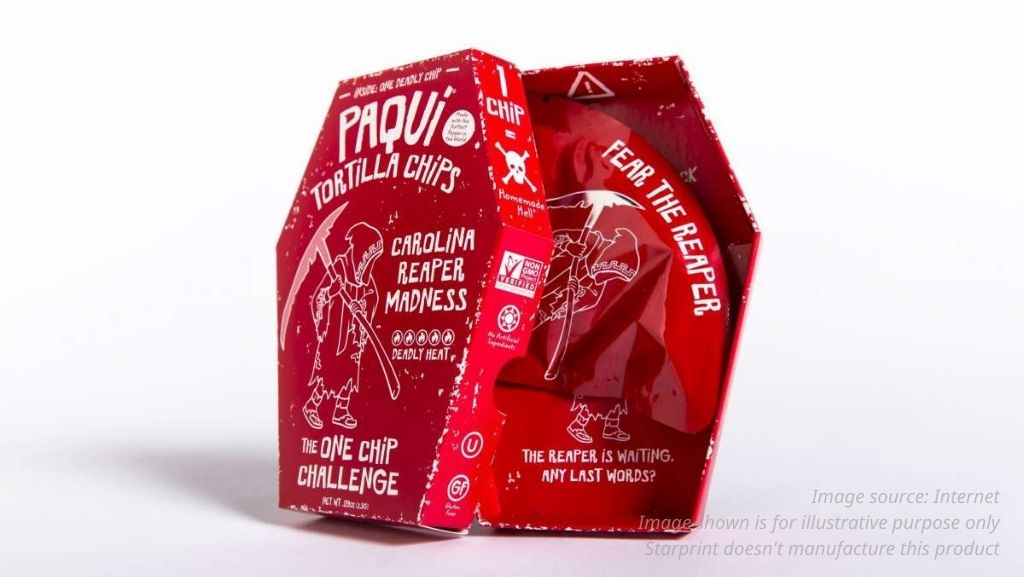 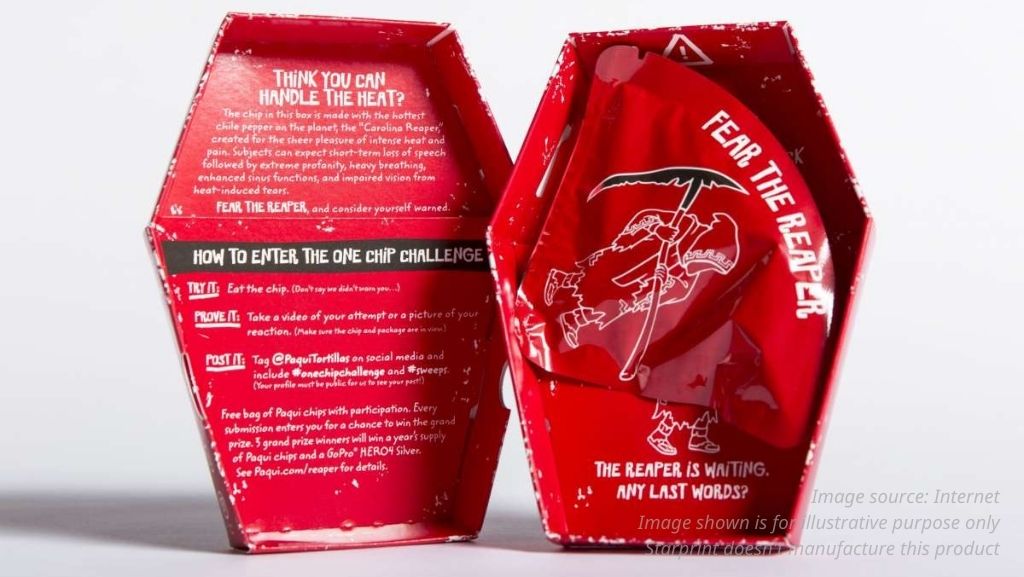 This is a brand of freezer pops that are created to be eaten out of their “brains”. Each zombie has its own name and personality, making each character unique with different attributes. Designed by Burdenburg ad agency in 2020 to celebrate the Halloween holiday, you would enjoy the fun just by looking at the facial expressions of each zombie freezer pop. 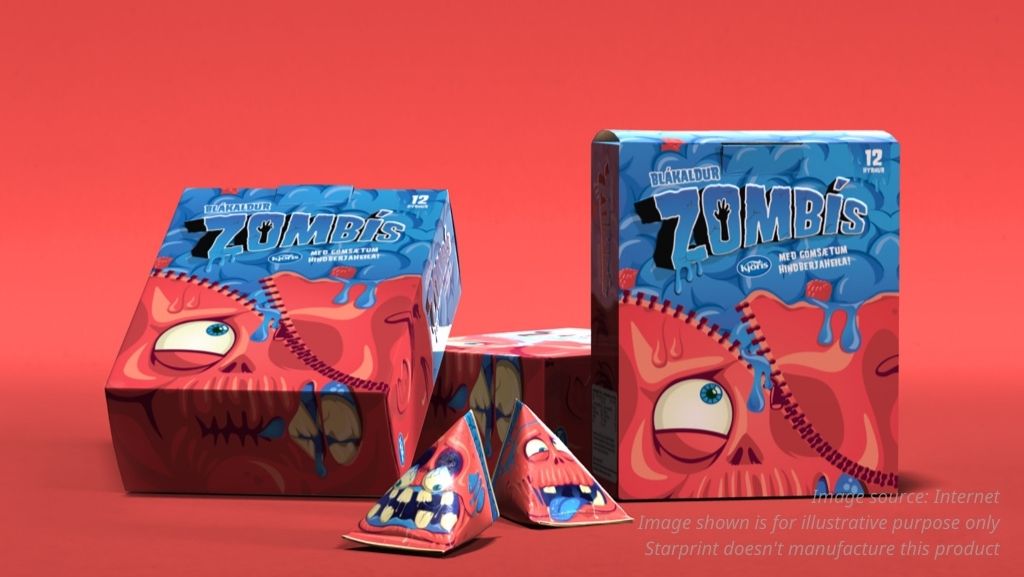 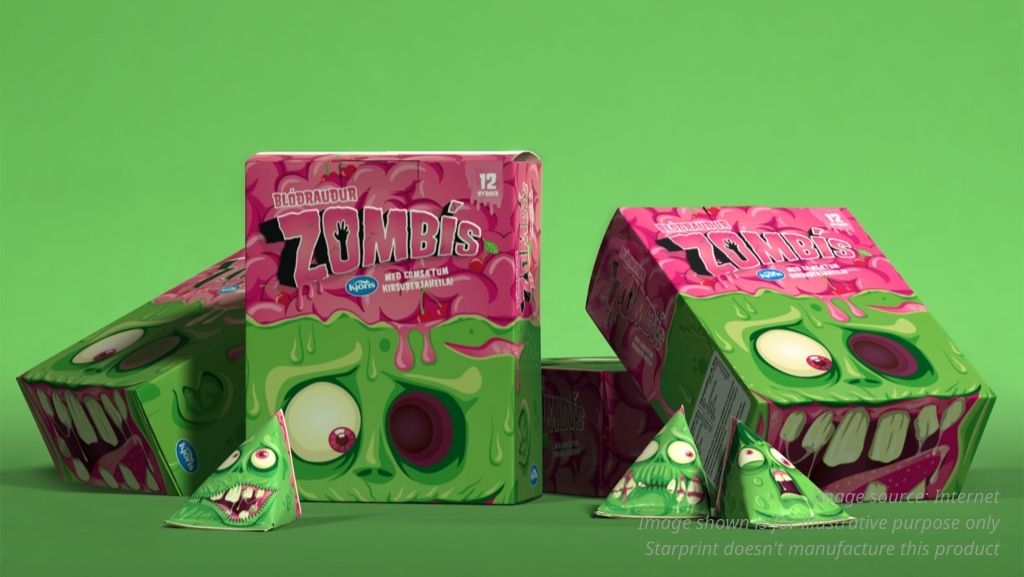 In 2015, United Biscuits debuted its first-ever Halloween-themed McVities’s sharing carton consisting of two Jaffa Cake bars in a “trick or treat house” paper box. It was built on the increasing success of the Halloween holiday that has seen it become the third-highest spending festival in the UK retail calendar. With the new pack design, they also launched their McVitie’s Halloween Jaffa Cake bars with new flavours for the spooky spirit of Halloween: one was in a revamped variation titled scary lemon and slime, the latter had replaced the previous white sponge with a chocolate sponge, topped with a zingy lemon and lime jam and covered in dark crackly chocolate. 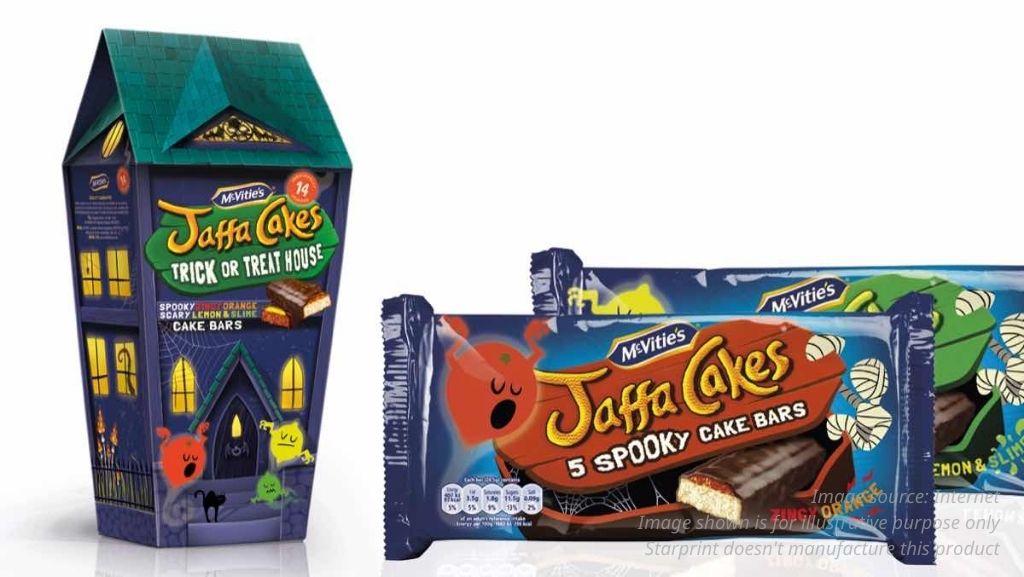 In October 2018, McDonald’s launched a campaign known as McDonald’s Trick. Treat. Win! Along with a creative strategy that allowed customers to choose what daily prizes they wanted to win and gave them more chances to win them, their limited-edition bat-design paper packaging at its US outlets has played a significant role in raising excitement and delivering feel-good moments to its customers. 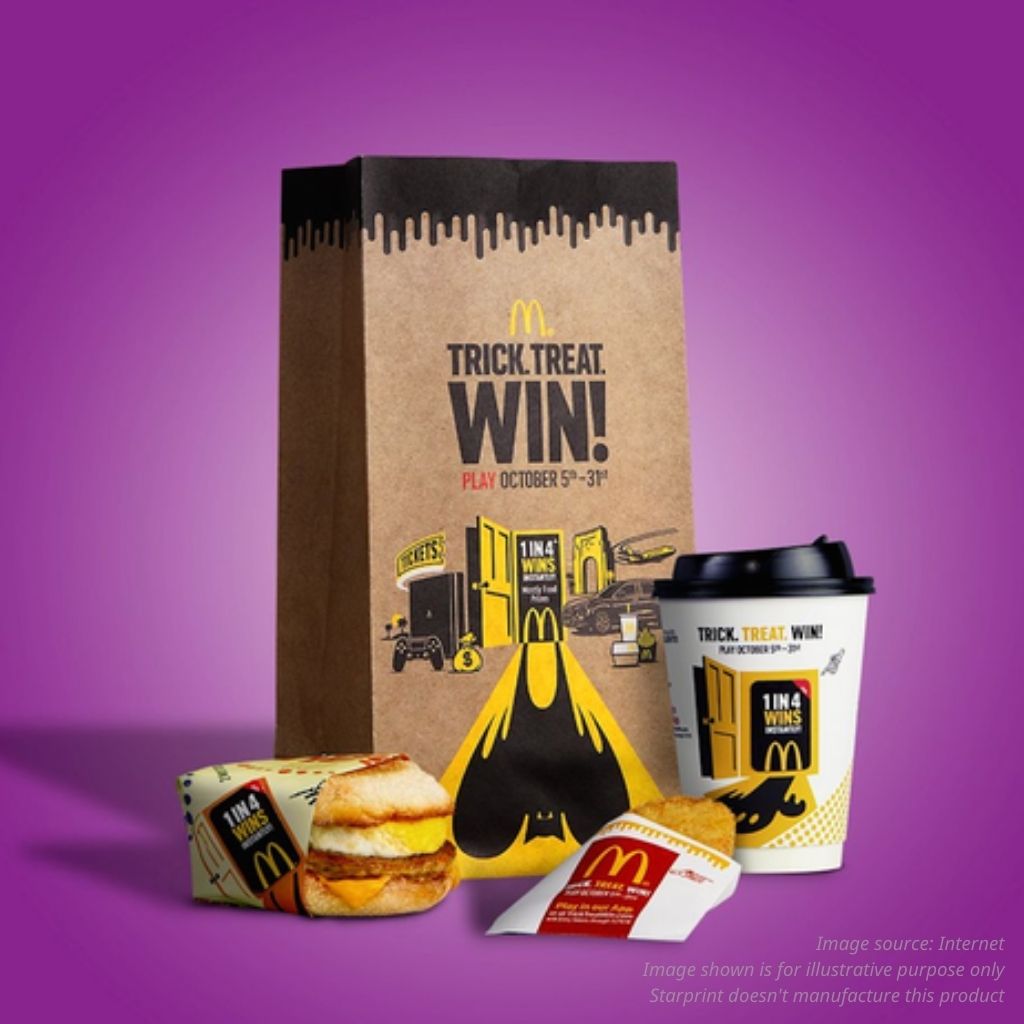 Each year, Fanta likes to dress up for Halloween by releasing a series of limited-edition soda cans and packaging. As a result, the new ghoulish graphics on packs of Fanta have encouraged consumers to stock up for the seasonal occasion, thus driving sales. This design of 2018 has four flavours in the packs of 12 cans named as Monster Flavours: Fanta Orange, Fanta Orange Zero, Fanta Strawberry, and Fanta Pineapple. Mattson Creation – the company responsible for this packaging’s graphic and illustration – has stylishly applied trendy hot colors in this packaging design, bringing freshness and the deliciously wicked assortments of Fanta tastes to its drinkers. 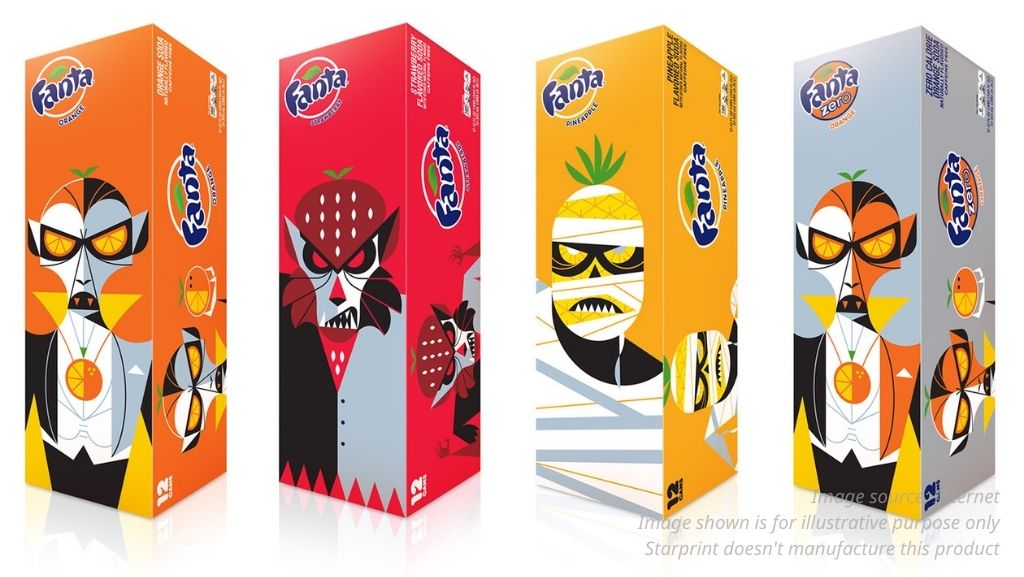 7. Candy and treats of well-known brands

In 2016 – Amazon has launched a few different sales on delicious goodies just in time for Halloween. We are seeing a wide range of options from M&M’s, Hershey’s, Kit Kat, Reese’s, and more at up to 35% sale off compared to the prices at that time. These are great choices for those who love the products of these candy brands but don’t want to buy too much and also own interestingly designed candy bags well suited for Halloween. 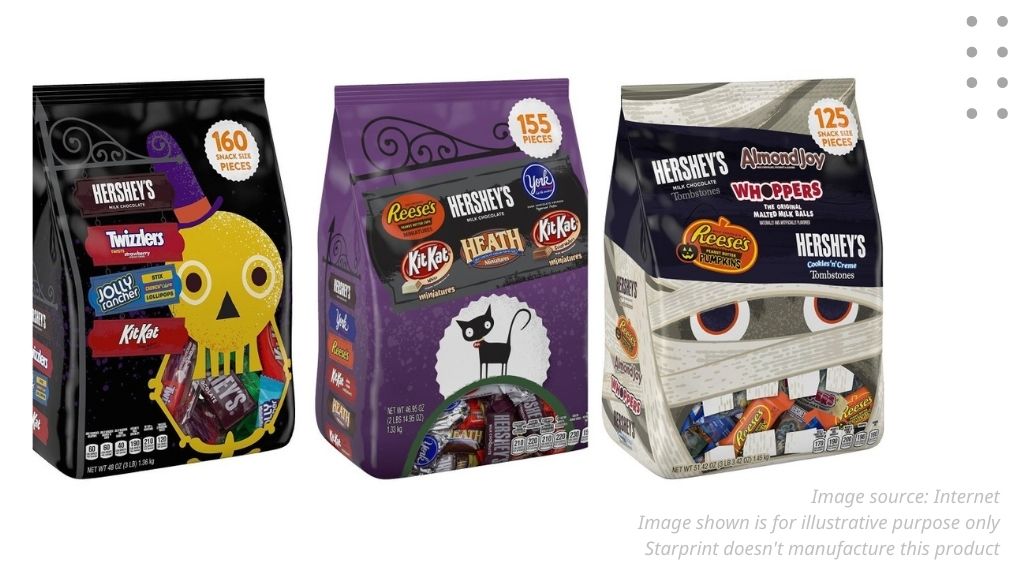 Above is the hand-picked list of Starprint Vietnam of the spookiest Halloween packaging designs. We hope it inspires you to create your next best creations. In particular, you can look over the packaging that we have made for other brands right here or reach out to us to have the most effective packaging solutions for your products.